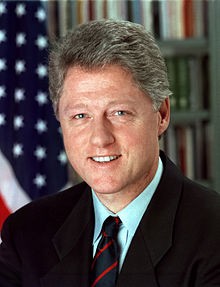 As a final vote in the Illinois House of Representatives approaches, President Bill Clinton called on lawmakers in Springfield to extend the freedom to marry to gay and lesbian couples in Illinois. The 42nd president expressed his support in a statement issued Tuesday, noting that, "Illinois has stood for the proposition that all citizens should be treated equally under the law."

"Our nation's permanent mission is to form a 'more perfect union' — deepening the meaning of freedom, broadening the reach of opportunity, strengthening the bonds of community," said President Clinton. "That mission has inspired and empowered us to extend rights to people previously denied them. Every time we have done that, it has strengthened our nation. Now we should do it again, in Illinois, with marriage equality."

A growing majority of Americans believe gays and lesbians should have the freedom to marry. Poll after poll shows support for marriage equality increasing across the country and across Illinois.

"Since the days of Abraham Lincoln, Illinois has stood for the proposition that all citizens should be treated equally under the law," President Clinton said in Tuesday's statement. "Lincoln himself came to Springfield in search of opportunity, and he dedicated his life to securing equal opportunity for all citizens. I believe that for Illinois and for our nation as a whole, in the 21st century that must include marriage equality."

President Clinton's support of marriage equality in Illinois comes at a time of increased support among national leaders and dignitaries. National leaders ranging from former Vice President Dick Cheney, U.S. Senators Mark Kirk and Rob Portman, former U.S. Secretary of State Colin Powell, U.S. Congressman and Civil Rights Leader John Lewis, and many others have expressed their support for the freedom to marry in recent months.

Illinois Unites for Marriage — a coalition led by Equality Illinois, Lambda Legal and the ACLU of Illinois — is continuing its statewide campaign in support of the bill, marshaling support and urging allies to step up contacts with their legislators as the House vote approaches. The coalition supporting the freedom to marry for all loving, committed couples — already strong with business, labor and community leaders, civic organizations, professional athletes, faith institutions and members of the clergy, African-American and Latino leaders, Republicans and Democrats — continues to grow.