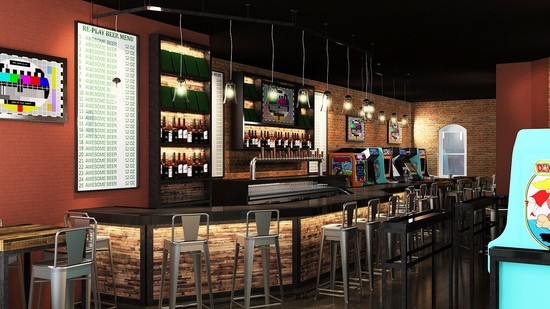 rendering of the new replay

Chicago, IL - Replay, a craft beer and bourbon bar meets retro arcade, is set to open on Friday, May 24, in the former Bucks Saloon space at 3439 North Halsted.

Boystown's newest destination will feature designs of an arcade with over 20 retro arcade games ranging from Ms. Pac-Man to Galaga, Space Invaders to Donkey Kong.

"Probably the thing that I'm most excited about is the addition of the video games," said owner Mark Liberson. "All of the old games from the 80's and 90's paying homage to the decades of Bucks beginning."

"Buck's has a very strong legacy," Liberson told ChicagoPride.com. "I'm really excited that we are now going to be taking over the bar that I originally fell in love with so long ago."

Replay will feature more than 24 craft beers on tap and a cocktail menu designed by Elixir's mixologist, Danny Quinn, and a limited food menu from Halsted's.

A media preview will be on Wednesday, May 22 (and ChicagoPride.com will be there). Replay Beer & Bourbon will open to the public on Friday, May 24.