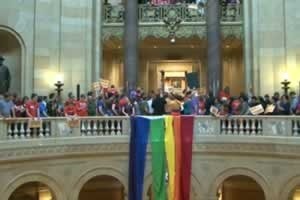 After roughly a three-hour debate, representatives, including 4 Republicans, approved the measure with a 75-59 vote. Two Democrats voted against the measure. It was a dramatic reversal for the chamber which just two years earlier approved a constitutional amendment defining marriage as a heterosexual union. Voters felt differently and rejected the proposal last November, setting in motion a new push to approve gay nuptials in Minnesota.

The vote in the House came just days after the measure received final nods from a House committee on Monday and a Senate committee on Tuesday.

Rep. Karen Clark, a Democrat and the bill's sponsor in the chamber, rose to speak before the chamber voted. She thanked her partner of 24 years, Jacqueline, for joining her at the Capitol on this historic day.

An amendment designed to shore up Republican support by inserting the word "civil" in front of marriage and sponsored by Republican David FitzSimmons was adopted with a voice vote.

"In my mind, it's further reassurance that it's the state role in marriage and not the religious institutions we're talking about," FitzSimmons told the Pioneer Press.

An amendment to abolish marriage in Minnesota failed by a wide margin (111-22).

Rep. Tim Faust, a previously undecided Lutheran minister and a Democrat, announced on the floor that he would vote for the measure.

Faust said that gay people are "children of God" and "yet they do not have the same rights."

"Today, we have the opportunity to give our brothers and sisters the same rights that most of us have taken for granted," he told colleagues.

The bill now heads to the Senate, where its prospects appear bright. Democratic Governor Mark Dayton has previously lobbied lawmakers on behalf of the measure.

If the law is approved, it will take effect on August 1, the same day that gay and lesbian couples in Rhode Island can begin marrying.