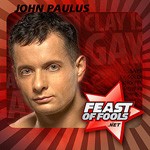 During the Feast of Fools (FOF) interview, Paulus restates his claim that he had unprotected sex with Aiken in a North Carolina hotel room providing sensational and graphic details of the encounter to Fernos and Felion. Paulus claims to have been first approached online by Aiken and says he can back his claims of a sexual encounter with copies of his instant message conversations. Paulus tells FOF that he has a “towel” stained with Aiken’s DNA, a claim he also made on the Howard Stern show in February 2006.

Paulus also tells FOF that Claymates, fanatic Clay Aiken fans, threatened him and were the cause for his release as a real estate agent in North Carolina.

It was in January 2006 that Paulus first alleged the sexual encounter with Aiken. At that time, The National Enquirer, Star Magazine, and The Globe published interviews with Paulus. The New York Post and The New York Daily News reported on the story in their gossip columns.

Aiken and his representatives have neither acknowledged nor denied Paulus' story. Aiken has repeatedly denied he is gay.

Hear the entire interview on the Feast of Fools Podcast #365. Feast of Fools is the most downloaded GLBT-themed podcast and recently won a People’s Choice Podcast Award.