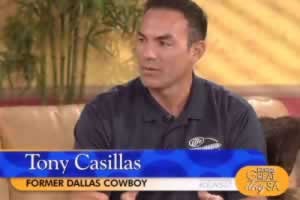 Dallas, TX - Former defensive lineman Tony Casillas said he played next to gay players on the Dallas Cowboys team in the 90s.

Casillas made his comments during a radio interview to discuss the recent coming out of Jason Collins, an NBA free agent.

"I know that I played with homosexual players and I knew this when I was playing," Casillas said on Dallas' 105.3FM The Fan. "There's a certain amount of intimacy in the locker room, I'm not talking in a personal way, but intimacy as far as working hard and being that close together, as far as accomplishing something on the football field. The problem is this society. That's why I applaud Jason Collins for coming out. Being a professional athlete people expect you to have this shield around you where you can't pretty much show your true nature, if you will, and you're feelings and I think for him to be able to do that – [I] think there may be a domino effect with this. ... There's a stat that shows one out of so many guys are homosexual, I had no problem with that because I knew that. I knew lining up next to the guy. We all have questions, but to me that didn't matter because the common goal was how we performed. It didn't matter. Another thing, it's like if you're black and I'm Hispanic, it's OK to go in the locker room and make fun of a guy if he's Hispanic but if he's a homosexual you just don't go there."

Casillas added that he believes most athletes don't care about a teammate's sexual orientation.

"I guarantee you, if you did a poll, anonymous throughout the NFL or any sport I would be surprised if it didn't favor players not caring [about] the sexuality of their guys being gay. I would guarantee that. People don't understand that even though you're this gladiator athlete, even though you're supposed to be bulletproof guys in that locker room, they don't care as long as you're doing your job," Casillas said.