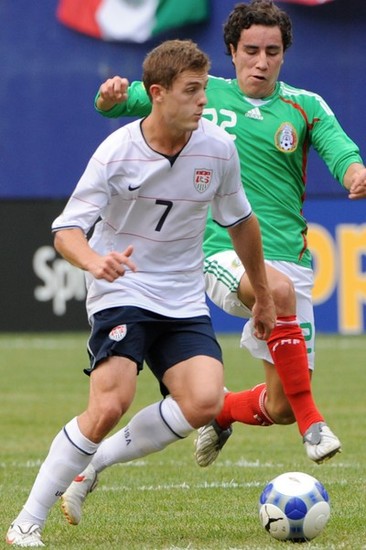 Chicago, IL - Robbie Rogers is young, gay and was a successful professional soccer star until he stunned the world in February by retiring from soccer and coming out to the world in a letter he posted online.

"Secrets can cause so much internal damage," Rogers said in his post titled Letter of Life.

Last week Rogers followed that jaw-dropper by telling ABC's Nightline that he might return to major league soccer.

"Gay athletes are athletes," Rogers said in the televised interview. "If I go back to soccer, I want to go back as Robbie. I just want it to be as simple as that."

Rogers played for the Columbus Crew from 2007-12 and last played in England for Leeds United, but because the Chicago Fire owns his contract, if he does return, it would make him the first and only openly gay player in any professional men's team sport, right here in Chicago.

"The Fire acquired the right of first refusal to Rogers from the Columbus Crew on February 4," Eunice Kim, Communications Specialist with the Chicago Fire confirmed to ChicagoPride.com.

While Kim did not state that the club is specifically expecting Rogers, 25, to return to soccer and join the Fire, a story posted to their website on February 15, the same day Rogers came out, Head Coach Frank Klopas said his opinion of the former U.S. international hadn't changed.

"Should Robbie want to return to the game, we would still be open to him being part of the Fire," said Klopas, who indicated that he had reached out to Rogers already.

Bill Gubrud, Executive Director and Board Chair of the National Gay and Lesbian Sports Hall of Fame, spoke enthusiastically about the possibility of Rogers returning to soccer in Chicago.

"One of the goals of the National Gay and Lesbian Sports Hall of Fame is to give support and encouragement to gay athletes of all ages and level of profession," stated Gubrud. "I think it would be a tremendous boost to the esteem of young LGBT athletes around the country to have a professional athlete of Robbie Rogers' caliber on and off the field to look up to as a role model in sports."

With the rumor mill buzzing not just about Rogers but about other major leaguers who may be preparing to come out, things appear to be looking up for gay athletes, who are often forced to reside in The Closet if they want to work.

"Sports is a bit behind in our country, that atmosphere is hard to change," said Rogers, who also said there are thousands of other gay sports professionals that are working but not yet out.

Whatever Rogers' future path in soccer, Gubrud agreed it would be exciting for Chicago-based sports fans to have their city be home to the nation's first and only out soccer player.