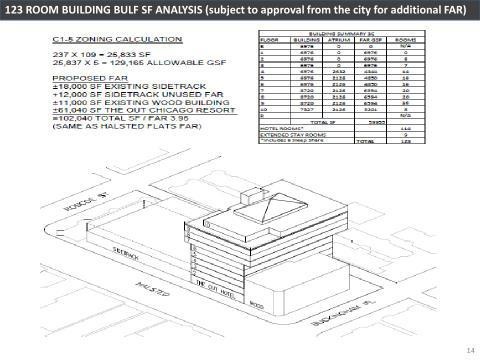 the out chicago development plans

Chicago, IL - The developers behind The Out NYC hope to bring their "straight-friendly" boutique hotel to the Windy City, specifically to the 3300 North block of Halsted Street in Boystown. Although rumors of The Out Chicago have circulated for over a year now, confirmation that the plan is moving forward came Friday when Triangle Neighbors vice president John Becvar posted an announcement of the proposal on the neighborhood association's Facebook page.

"The developer is trying to rush this through and hasn't attended Triangle meetings, but is having a joint neighborhood meeting on Thursday, April 11th at 7PM at the 19th District Police Station Community Room," Becvar said in his post. "Everyone should definitely attend."

Becvar's post included a diagram of the proposed hotel, which would stack six stories high and contain over 100 rooms (123 to be exact) in addition to a fully enclosed glass courtyard for events, a restaurant or cafe, a "bOUTique" retail space and a gym/spa.

According to a proposal issued by Parkview Developers, The Out Chicago will be constructed adjacent to Sidetrack, with lobby-access to the bar, incorporating Minibar on the ground floor as a dance and cabaret space. The Out NYC opened this past winter and describes itself as a "gay urban resort... .a place where gay people, their family and friends can experience the best of lodging, nightlife, food, drink and design."

Through communications with several of Boystown's business leaders, Reisner has gaged support for the new endeavor in Chicago's famous gay neighborhood. Paul Cannella, owner of the popular bar Scarlet, posted a Facebook status Monday morning encouraging community members and neighborhood residents to attend the special meeting this Thursday, where more details about the project will be released.

"We're talking about tens of millions of dollars being invested in our neighborhood, creating 150 plus jobs directly, but the spillover will be even greater," Cannella told ChicagoPride.com. "The Out will have singers coming from NYC, art displays in the lobby, host business meetings, conventions, and other larger gatherings such as gay or straight weddings. With this development and the new COH Senior Center, the Lakeview neighborhood is cementing the fact this will remain the center of LGBT activity in the city of Chicago."

Becvar raised concerns about the development of this project, insisting on the separation of the concept and proposed use from the actual process of getting approval to build a large structure. This includes questions of zoning, restrictive covenants on use, licenses required and factoring in the existing proposals for large structures being built in the Wrigley area as well as on Halsted south of Grace, and what the impact of those changes will be on the neighborhood.

However, with visitors to Boystown currently limited to City Suites Hotel on Belmont, The Best Western Plus Hawthorne Terrace Hotel on Broadway, the Days Inn Chicago just south at Clark and Diversey and Villa Toscana Guest House, the Victorian-style bed and breakfast on Halsted, a new hotel is just what 44th Ward Alderman Tom Tunney has in mind for the area.

"Their vision aligns with the 44th Ward Master Plan to have more hotel and lodging opportunities available as out-of-town visitors currently have limited options," Erin Duffy, Director of Community Outreach for Ald. Tunney, told ChicagoPride.com. "The Triangle Neighbors meeting on Thursday will be an opportunity for the developers to discuss their proposal with the community for the first time. "

Thursday's meeting, which is open to the public, is set for 7 p.m. in the Community Room of the 19th District Police Station, located at 850 W Addison between Fremont and Reta. While no final decisions are expected, the meeting will give the developers a chance to release details to the public, garner community support and start the process to bring the luxury brand to Chicago.

Check back with ChicagoPride.com for more details as they are released. To see more of The Out NYC, visit theoutnyc.com.

News of the proposed development was first reported by RedEye Monday.