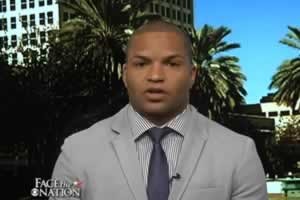 Appearing on CBS's Face the Nation, Ayanbadejo reiterated his support for giving gay men and lesbians the right to marry.

"This is something I've been speaking about since 2009," Ayanbadejo said. "In my opinion it's just the evolution of civil rights and equal rights. Athletes do a lot to change society and this is something we can make a big difference. It starts with bullying and kids in elementary school and goes all the way to the legislative, and treating everybody equally."

"This is a fight that myself and a bunch of my colleagues want to take on and we feel like everybody should be treated equally. We're not going to stop until everyone is treated fairly."