Rob Portman warned that his gay son may die of AIDS 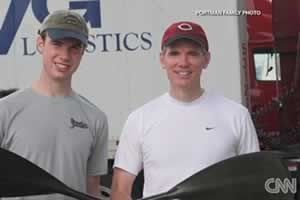 The Christian conservative Government Is Not God PAC has warned Ohio Senator Rob Portman that his gay son may die of AIDS.

On Friday, Portman became the first GOP senator to endorse gay marriage. Portman wrote in an op-ed that he had a change of heart on the issue after his son, Will Portman, came out to him and his wife, Jane.

The group warned Portman in a blog post that he was "accepting a behavior that may eventually kill his son from AIDS, other sexually transmitted diseases, or oral cancer."

"Homosexual sex is ultimately just as destructive as cocaine use. Would Portman suddenly call for the legalization of cocaine if his son had announced that he was a cocaine addict? Would that be 'loving' and 'compassionate'?"

"Will Portman support 'group' marriage – which is the next phase of the gay agenda?"

"What will happen to Rob Portman's belief system when he discovers that his son is infected with HIV or throat cancer?"

The organization also called on Portman to put his son into "ex-gay" conversion therapy.

"A person with a same-sex attraction has a treatable condition. No one is 'born gay' and there is hope for those who want to overcome these destructive behaviors."