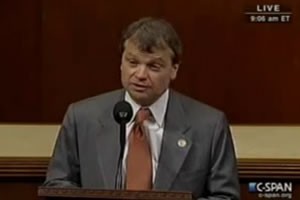 After passage in the Senate last month, the measure awaits a vote in the House.

"We urge you to vote 'yes' on Senate Bill 10," the representatives wrote. "Illinois will be stronger when we allow all loving and committed couples the chance to care for and protect one another through marriage."

"An ever-increasing number of Illinoisans agree. From public opinion polls to letters and conversations with constituents, we are seeing a clear and rapid shift toward support for marriage equality. Put simply, the public has turned a corner on this issue. Most Illinoisans believe we should not impose second-class status on one group of citizens – and they believe that government should treat all families with equity, fairness and respect."

"Please join us in being on the right side of history – and vote to include all Illinoisans in the freedom to marry." (Read the entire letter.)

Illinois has 18 congressmen. Following the 2012 elections, there are 12 Democrats and 6 Republicans.