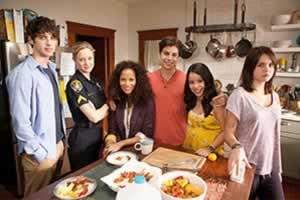 ABC Family will premiere the Jennifer Lopez-produced lesbian drama The Fosters on Monday, June 3, following the series finale of The Secret Life of the American Teenager, the cable network announced this week.

The Fosters is an hour-long drama which centers on a lesbian couple who are coping with raising three children when a wayward teenage girl moves in. One of the women is a police officer (played by Teri Polo, Meet the Parents), the other a private school teacher (Sherri M. Saum, Rescue Me). Together they are raising a biological son and adopted teen twins of opposite sexes.

Lopez, who developed the drama with Peter Paige (Queer as Folk), will also appear as a guest star.

In announcing the pick-up last month, ABC Family Michael Riley said The Fosters "will bring the same depth, heart, close relationships and authenticity that our viewers have come to expect and will pair nicely with our already established pop culture hits."

ABC Family also released a trailer for The Fosters.