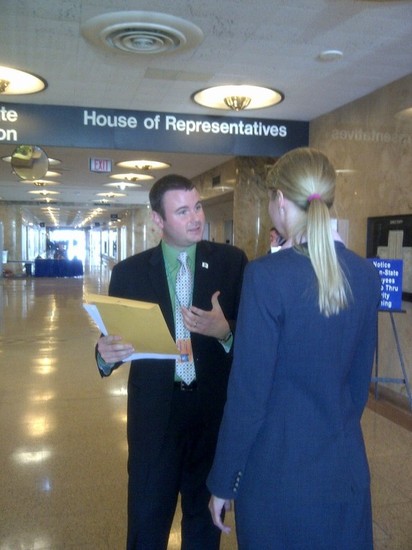 Springfield, IL - Marriage activists continue to press House legislators towards a vote on Religious Freedom and Marriage Act, which, if passed, would make Illinois the 10th state in the union allowing its gay and lesbian citizens to marry.

A vote had been expected by midweek, but seemed unlikely to take place Wednesday, according to Bernard Cherkasov of Equality Illinois, which has been lobbying on the bill's behalf.

"But I still feel strongly that we're very close," said Cherkasov. "The majority of Illinoisans want this, and the legislators know their constituents want it."

House Speaker Michael Madigan said Wednesday that the bill still was likely 12 votes shy of passing. He also said that he'd been contacted by Cardinal Francis George about the issue, but that he nevertheless supported the bill.

Sixty votes are needed for passage. Even with a Democratic majority in the House, it's generally a more conservative body than the Senate; supporters have had to carefully weigh when to call the vote as numbers have fluctuated throughout the week. Rep. Greg Harris (D-Chicago), the bill's sponsor, had long refused to publicly announce when it might take place. He told Chicago Sun-Times March 4, "When I call this for a vote, it will pass."

Harris was skeptical of Madigan's numbers Wednesday. He told Chicago Tribune, "I have not spoken to the speaker so I don't know what assumptions he's using."

A number of prominent Illinoisans have weighed in with support, among them Mayor Rahm Emanuel, who sent a message to supporters March 4 reminding them that "the clock was ticking" and that they should contact their legislators, as well as retired Chicago Cubs shortstop Ernie Banks and former Chicago Bears defensive end Richard Dent, who were among athletes signing a letter in support of the bill.

"In sports, any time a player is not treated with fairness and respect, the game is diminished," according to the letter. "Similarly, treating any group of people as second-class citizens hurts us all, because discrimination is wrong no matter whom the target is."

Illinois GOP chairman Pat Brady staved off an attempt to oust him from office after he voiced support for the legislation. Several moderate Republicans, among them U.S. Sen. Mark Kirk, voiced support for Brady and warned that the objectors risked alienating more moderate conservatives.

But other opponents have also mobilized. A coalition of African-American churches and conservative Catholics said March 5 that politicians voting for gay marriage would not be welcome to speak or visit. Windy City Times reported that Oak Park residents are receiving robo-calls from former Sen. James Meeks, asking them to persuade Rep. La Shawn Ford (D-Chicago) to vote against the bill. Ford has not disclosed how he'll vote, and supporters of the bill held a rally outside his office March 10.

Downstate residents have received numerous robo-calls as well; many were aimed at Rep. Mike Smiddy (D-Hillsdale) and Sen. Andy Manar (D-Bunker Hill), according to DNAinfo.com. They decry the politicians for having accepted "homosexual money."

The legislation passed the House Executive Committee in a narrow 6-5 vote Feb. 26, and the full state Senate Feb. 14. Gov. Pat Quinn has said that he would sign it.

After the bill passed out of the Senate Executive Committee last month, Quinn issued a statement that said, "We took the first step towards marriage equality two years ago when I signed civil unions into law. Since that day, thousands of committed couples in 92 counties across our state have entered into civil unions. Now is the time for the next step in providing equal rights to all people in Illinois."

On Wednesday, Cherkasov emphasized the importance of constituents contacting their legislators. "Every day until this passes, people need to be in touch with their representatives—let them know that the people of Illinois want this brought to a vote," he said.

How Illinois lawmakers stack up on marriage equality
Based on lawmakers' comments, history, questionnaire answers and media statements, Windy City Times has generated a complete list of how House members are indicating they'll vote.

State Rep. Harris ‘prepared to put it all on the line' in final push for marriage bill