Lily Tomlin: Johnny Carson tried to out me 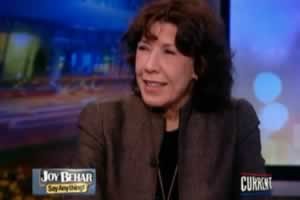 Appearing on cabler Current's Say Anything, Tomlin, 73, corrected host Joy Behar when she said that her guest had never been closeted about her sexual orientation or her relationship with comedy writer and collaborator Jane Wagner, whom she met in 1971.

"It is remarkably wonderful [that celebrities can be openly gay], because listen I was on Carson one night back in '73," Tomlin said. "Carson said to me, knowing full well what he was saying, he said, 'Well, now you've never been married, have you?' And I said, 'No.' And he said, 'Don't you want to have children?'"

"And you could hear the audience got dead [silent], because in those days if a girl said she didn't want to have children or plan to get married it was ... something's wrong with you."