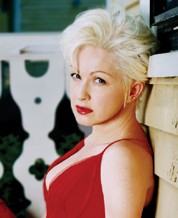 Chicago, IL - Cyndi Lauper will perform at the Gay Games VII Closing Ceremony on Saturday, 22 July 2006 at historic Wrigley Field, the home of baseball’s Chicago Cubs. Tickets are $50 to $90 and are on sale at tickets.GayGamesChicago.org.

"I feel like this is becoming sort of a tradition for me since I performed last time the Gay Games were in the States, in New York City in 1994," said Lauper. "I am thrilled to be a part of the 2006 Gay Games in Chicago."

Lauper joins a slate of more than 60 music, television, arts, culture and sports legends from around the world performing in the 2006 Gay Games Opening & Closing Ceremonies.

"I have always felt that much of Cyndi Lauper’s music is a personal anthem of love and support for the world’s lesbian & gay community," said Greg McNitt, Gay Games Ceremony Committee Co-Chair. "Whether in her music or through her support of organizations like PFLAG (Parents, Families & Friends of Lesbians and Gays) or the Matthew Shepard Foundation, her work is so moving in part because it obviously represents her own true colors; her belief that everyone is beautiful, "like a rainbow." Her appearance at Wrigley Field is going to bring the house down!"