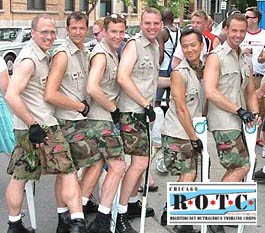 Chicago, IL - They've teased, taunted and seduced audiences for 13 years. And they're ready for more ROTC Chicago is gearing up for another hot summer schedule.

With precision, skill, and flare, the Righteously Outrageous Twirling Corps (ROTC) will entertain audiences throughout Chicago this summer and fall. In addition to its regular schedule, the all-male group will perform in the Chicago Gay Games Opening and Closing Ceremonies and exhibition in July and have made plans to travel to Dallas for its Pride festivities in September.

"We're planning an exciting and busy summer for ROTC Chicago," said Director Mik Erwin. "We've added several new performances to our schedule this year, and we're sure to shock audiences with more spontaneous, campy drills and routines at each and every one!"

ROTC Chicago will perform rifle routines to diva disco hits such as "Baby, I'm a Star" by Tina Turner, the opening cheer from the movie "Bring It On," Toni Basil's "Hey Mickey," and Geri Halliwell's classic song "It's Raining Men." During this year's Chicago's Pride, ROTC will make its 2006 inaugural performance with the hit song "Don't Leave Me This Way" by Jimmy Somerville and the Communards.

In addition to the exciting performances planned for ROTC this summer, they've also unveiled a new logo for the group, designed by one of members, Kerri Baker. The logo encompasses the colors of the Chicago city flag, with an added a military-style lettering and two embedded rifles resembling the core function of the group. You can see the new logo on the group's Web site, www.rotcchicago.org, and on window decals at sponsoring businesses throughout the Chicago region.
For more information about ROTC Chicago, complete schedule of performances, members list, performance pictures and list of sponsors, visit them online at www.rotcchicago.org.