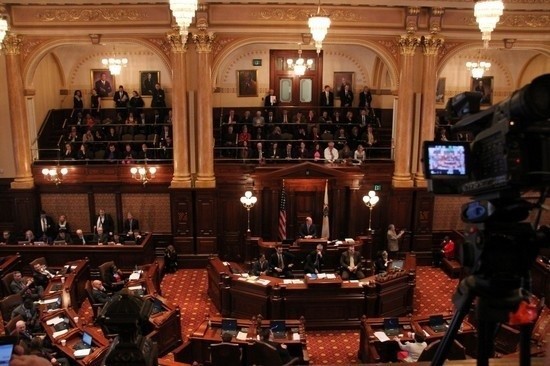 Springfield, IL - A bill to legalize gay marriage in Illinois will face its first hurdle in the House today, when the 11-member House Executive Committee convenes at 3 p.m.

Update: (Feb. 26 13:45:45) Work on gun control in the General Assembly has likely delayed the scheduled committee hearing. A vote is still expected later this afternoon or this evening according to Equality Illinois CEO Bernard Cherkasov.

The Religious Freedom and Marriage Fairness Act cleared the Senate by a vote of 34-21 on Valentine's Day.

"The Senate vote sent a strong message that the majority of Illinoisans want to treat everyone equally in the eyes of the law, and to protect the right of our various faiths to consecrate or not consecrate marriages as they choose," state Rep. Greg Harris (D-Chicago), the House sponsor of the bill, told ChicagoPride.com last week. "The debate also made clear that there are still many in our State who want to fight equality and fairness, so it is important those of who do continue to make our voices heard."

If the measure passes the committee it will advance to a full vote by the House where opposition is expected to be more formidable. But Gov. Pat Quinn has said that he would sign the bill into law, and urged its passage in his State of the State address.

Momentum continues to build as Illinois is set to become the 10th state to legalize marriage equality.

On Sunday twenty-three prominent Latino leaders called on Illinois lawmakers to approve the bill. Among those signing an open letter of support were former City Clerk of Chicago Miguel Del Valle, Executive Director of the Latino Policy Forum Sylvia Puente and Vice President of the Chicago Board of Education Jesse H. Ruiz.

A poll released last week by Crain's Chicago Business showed a growing number of Illinoisans supporting marriage equality, with 50 percent in favor and only 29 percent opposed to the bill.

"The momentum is on the side of the freedom to marry. And lawmakers realize that a clear majority of Illinoisans want the Representatives to vote in favor of the marriage bill, Equality Illinois CEO Bernard Cherkasov told ChicagoPride.com.

Cherkasov said that Illinois Unites for Marriage, a coalition of groups supporting marriage equality, have worked to build support in the House.

A date has not been set for a full House vote yet.

On the Web: Find your Representative