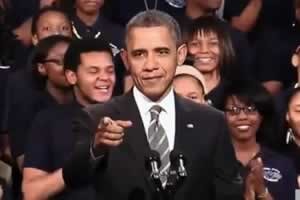 "Hey, Chicago!" the president said in addressing students, faculty and parents from the Hyde Park Career Academy. "It is good to be home!"

"Some people may not know this, but obviously, this is my old neighborhood. I used to teach right around the corner. This is where Michelle and I met, where we fell in love."

"This is where we raised our daughters, in a house just about a mile away from here – less than a mile. And that's really what I've come here to talk about today – raising your kids."

"There's no more important ingredient for success, nothing that would be more important for us reducing violence than strong, stable families – which means we should do more to promote marriage and encourage fatherhood. Don't get me wrong – as the son of a single mom, who gave everything she had to raise me with the help of my grandparents, I turned out okay."

Obama spoke a day after the Illinois Senate approved a bill seeking to make Illinois the 10th state to legalize marriage for gay and lesbian couples. The measure now heads to the House.