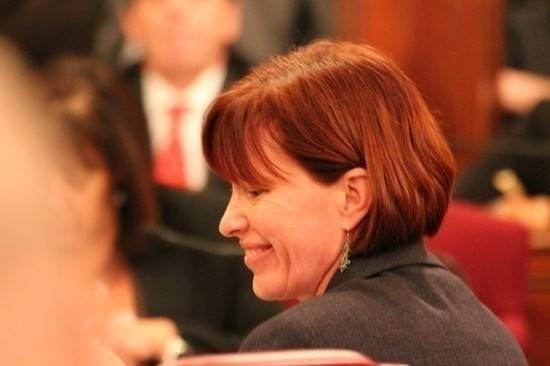 Springfield, IL - Valentine's Day 2013 may mark the next step towards marriage equality for gay and lesbian Illinoisans. A vote on the Religious Freedom and Marriage Fairness Act is expected today, possibly as early as 11 a.m. this morning.

State Senate Pres. John Cullerton (D-Chicago) announced early in February that he's confident Democrats have the 30 needed votes to pass the legislation and said the vote would likely happen today. That announcement bodes well for the bill, according to activists lobbying for its passage.

"I believe that the Senate president would not have announced a timeline on the bill if he did not think it had the votes to pass," Equality Illinois CEO Bernard Cherkasov told Windy City Times Feb. 1.

The vote comes after several months of the legislation's supporters working to gain traction. The legislation's sponsor, state Sen. Heather Steans (D-Chicago), said in December that she thought there was enough support amongst her colleagues for a vote in early January, during the lame duck session. But a missed deadline and some absent Senators meant further delay.

"Timing does not look like it is on our side for this push to a vote," said Cherkasov at the time. "But I think that everything we've built these last few months is going to work in our favor, and that it will be voted on relatively quickly."

The news was not completely negative that day. The Senate Executive Committee did vote 8-5 to move the legislation to the Senate floor, meaning that same-sex marriage would be voted on in the legislature for the first time in Illinois history.

If the bill passes in the Senate, it would need to pass the House, where opposition is expected to be more formidable. But Gov. Pat Quinn has said that he would sign the bill into law, and urged its passage in his State of the State address.

After the bill passed out of the Senate Executive Committee a second time last week, Quinn issued a statement that said, "We took the first step towards marriage equality two years ago when I signed civil unions into law. Since that day, thousands of committed couples in 92 counties across our state have entered into civil unions. Now is the time for the next step in providing equal rights to all people in Illinois."

The bill's proponents have faced opposition from various religious organizations in the state. At the Executive Committee hearing in January, Bishop Thomas J. Proproki of Springfield warned, "The pending bill would radically redefine what marriage is for everybody. ... Laws have long-term consequences because laws teach—they tell us what is socially acceptable, and what is not."

Proproki and Ralph Rivera of Illinois Family Institute further cautioned that churches might be compelled to perform same-sex marriages or face losing tax-exempt status, for example. But Camilla Taylor of Lambda Legal tried to assure the committee that the legislation would in fact protect churches from such pitfalls.

Anthony Martinez of The Civil Rights Agenda said that the legislation's references to religious freedoms were intended "to enhance the religious protections that were already put into place by the state. It's unfortunate that they felt that they had to push back against something that was trying to bring them to the table."

Chicago Cardinal Francis George has also voiced opposition, writing last month that parishioners should contact their legislators to oppose the bill. "The state has no power to create something that nature itself tells us is impossible," according to George's statement. LGBT activists organized by Gay Liberation Network protested this past Sunday at Holy Name Cathedral in response.

As the vote draws near, the legislation's supporters have contended that their opponents are running out of reasons to object to the legislation. "These are the same tired old arguments that they keep bringing up," said Rick Garcia of the Civil Rights Agenda.

Passage today would be further indication of coalescing support for gay marriage in the state. Polls show about 47 percent of residents support the cause, while 42 percent are opposed. Even the members of the state GOP have weighed in with support; party Chairman Pat Brady has lobbied on behalf of the measure, to the chagrin of several of his colleagues.

According to a Jan. 27 Chicago Sun-Times column by Rich Miller, many in the GOP see the writing on the wall, and would like to have the gay marriage issue behind them.

"The reason so many Republicans would like to see the bill passed is because they know that with the huge, new Democratic majorities in both legislative chambers, it's eventually going to pass anyway," wrote Miller. "... The issue is trending hard against the GOP's historical opposition, and they want the thing off the table before it starts to hurt them."