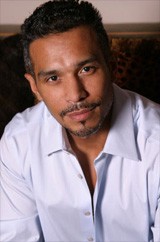 For thousands of dance music enthusiasts, the name Tony Moran is synonymous with bigger than life songs from bigger than life artists singing their hearts out to bigger than life productions all created to make our world wide dance floor a celebration set to a high energy soundtrack. Pretty big shoes to walk in from such a little guy! With the musical paintings Tony creates from his remixes and original work, one cannot help but envision a towering force of a DJ/producer/singer. Picture pro-wrestler-turned-actor "The Rock" as a DJ. Instead, this massive force field of creative energy and passionate music comes from a very tan, very handsome "5 foot and some change" master of the dance music world.

Coming off his Grammy-nominated turn as co-producer of Gloria Estefan’s 1998 wildly successful "Gloria!" CD, Tony’s sexy concoction of electric vocals and explosive builds set global dance floors a blaze but he was not the DJ for these events. Every circuit party DJ in the land was using Tony’s magic to work their dancers into a frenzy while he stayed studio bound and kept producing hits for endless talents here and abroad. In 1999, Miami’s annual Winter Party CD featured "DJ Tony Moran" with many original tracks produced by him, including a standout remake of the 80’s group When In Rome’s "The Promise." The new version, sung by Tony, set the tone for a rebirth of music with emotion. To visit his recording studio is like hanging out in an elaborate VIP lounge decorated in gold records from artists such as Cher, Janet, Celine, Luther, Donna, Mariah, Deborah Cox and Michael Jackson to name a few. The list from the last twenty plus years goes on and on, but Tony is not fazed by the star power that has graced his creative landscape.

I took a chance and emailed him as a fan back in 2001. I spent over a week writing and rewriting the letter hoping not to come off too gushy or gay or a twelve year old girl meeting Justin Timberlake for the first time. SEND. What can it hurt, right? He may read it, he may have "people" who read and delete them for him. At least my appreciation is out there in cyberspace somewhere. Two weeks later we get home late from a dinner party. My partner Roger checks voice mail and says, "I think you are going to want to listen to this tonight, (sing-songy) soooooomeboooooody got a special meeeeeeeeeeessage." Tony FREAKIN’ Moran called me, thanked me for my email and asked me to call him back!?! Talk about a twelve year old girl! Sitting next to Oprah on a trolley in Philadelphia in 1999 talking about nothing yet everything at the same time didn’t get me this giddy. Next thing I know, I am sending him some ideas for remakes that Manny Lehman and I had discussed and with six months of coaxing, I woo’d Tony out of the studio and back into the DJ booth here in Chicago for a classic Circuit MOM T-Dance at the "old Crobar" in April of 2002. From that day on, we have become great friends and shared so many of life’s joys and challenges.

On Sunday, April 30, Tony and I hit the "new Crobar Chicago" for The City Of Babylon Tour. (Event Details) I am extremely excited to DJ with Tony again. We had a blast doing the closing event during White Party Miami featuring Deborah Cox (and Paolo Pincente, but that’s another story) last Thanksgiving. Watch for my full interview with Tony Moran coming this week???