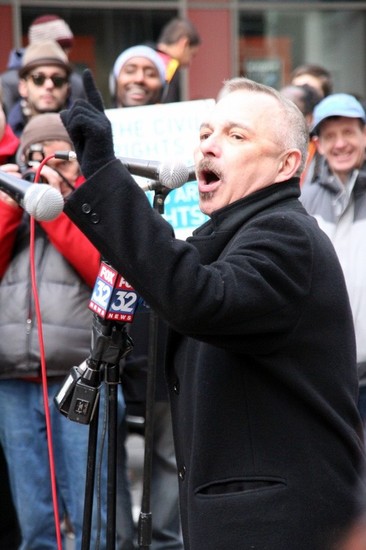 The Chicago Rally for Illinois Marriage Equality, which was organized by a coalition of activists, kicked off at noon with a series of speeches from activists and politicians, including Ald. James Cappleman (46th), Ald. Robert "Bob" Fioretti (2nd) and Rick Garcia of The Civil Rights Agenda (TCRA).

Garcia, who has spent decades fighting for gay rights in Illinois, presented the most colorful comments of the afternoon.

"We've spent a long and crazy week in Springfield and you may have heard some people want to throw in the towel because the clock is ticking and the end of the session in Tuesday," said Garcia. "Let me tell each and every one of you - as I look in your eye - we have until Tuesday to get it done in this session."

Garcia was speaking of a bill legalizing gay marriage in Illinois which passed a Senate Executive Committee hearing on Thursday. Senate Democrats and activists announced late Thursday that lawmakers would not act on the legislation until the next general assembly, which begins Wed., Jan 9.

"I do not care what high-priced political consultants say, I don't care what media consultants say. I'm saying to you that we are going to work until the last minute. We deserve it, it is our right," Garcia told the cheering crowd.

He concluded, "And you know what the message is to them? I got two. One isn't so nice, but one is really nice. One is get the job done, get the lead out, do it. And the other one is do not fuck with us."

The crowd of nearly 200 people again erupted into applause and cheers.

Suzanne Anderson-Hurdle pastor of Good Shepard Lutheran Church, who was joined by her husband, spoke of the Catholic Church's involvement in the gay marriage debate.

"I'm tired of listening to men who have never been married, and can't get married, tell me and my people what marriage is about," she said.

The hour-long rally concluded with another reminder from Martinez for people to call their representatives and senators.

Enter into the garden of Eden