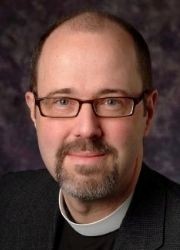 "Dear Sisters and Brothers in Christ,

I am writing today to express my support for the bill currently before the Illinois legislature that would allow same-sex couples to marry legally. As I am sure you are aware, my support for this legislation imposes no duties on you. I cherish the fact that the Episcopal Church trusts its members to arrive at their own conclusions about moral and political issues. I would like to say a few words, however, about how I came to my opinion, in part because I believe I owe it to you as your bishop, and in part because I believe that the Christian argument for legal marriage equality is not well understood.

The state of Illinois and the Christian church face different questions in determining whether it is good and wise to allow same-sex couples to marry. If one believes in equality before the law, it is extremely difficult to justify denying the benefits of civil marriage to same-sex couples. Opponents of the current legislation would have to present compelling evidence that marriage equality will harm our state so deeply that we must continue to deny same-sex couples the rights that opposite-sex couples freely claim for ourselves. I do not believe that the experience of states and countries in which same-sex couples are already free to marry legally supports this case. Rather, extending the benefits of civil marriage to same-sex couples has made it easier for them to order their lives together, to care for one another and to raise children in a stable home. Creating stronger, happier households contributes to the common good, and that is enough reason to support any legislation.

The debate over marriage equality, however, is seldom decided entirely on its merits as sensible public policy. Because both church and state claim authority over the institution of marriage, the debate always takes a theological turn. I do not believe the state owes the church any deference in defining civil marriage. But my own convictions about the nature of marriage and the sort of laws that should govern it are inescapably shaped by my Christian faith. I also hope that the current civil and religious debates about marriage equality and the blessing offered by the church to same-sex couples will enrich the understanding of Christians and other people of faith about the nature of all committed life-long relationships.

I believe that marriage is a sacred vocation. The union of two persons in heart, body and mind is a school of holiness, a way of ordering our lives so that we might learn to be more faithful servants of Christ. I also believe that the faithful, loving, and lifelong union of two persons--of the same sex or of opposite sexes--is capable of signifying the never failing love of God in Christ for the church and the world. Such unions can be sources and signs of grace, both for the couple and for the wider community.

As a Christian, I believe that our society needs all of the sources and signs of grace that we can get. As a citizen of the United States, I believe in equal protection under the law. I believe that both ends will be served when marriage equality is the law of the land in Illinois, and I am grateful to be bishop in a church that offers all couples a community of faith, love, support and accountability."