GENRE Magazine Announces its Man of the Year 2006 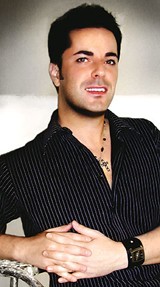 GENRE Magazine has announced that Joe Fitrzyk of Detroit, Michigan has been named its GENRE MAN for 2006. Overall, the contest drew over 280,000 votes from all over the world. Readers chose from among some of the hottest gay guys in the United States to find a winner.

When the final voting results were in, Mr. Fitrzyk said, "First, I need to thank Chris Ciompi, Steve Guerrini and GENRE Magazine for this awesome ride. I came out when I was eighteen years old, and one of the first things I did was pick up a copy of GENRE. Fifteen years later, the fact that I'm even a small part of this publication is very special to me."

GENRE Publisher Steven Guerrini says, "The GENRE Man competition allows us to keep a pulse on our readership. Over the past fifteen years, GENRE Magazine has grown alongside the gay community, and the GENRE MAN competition is one of the ways we are able to stay connected with the modern gay male."

GENRE believes Joe Fitrzyk embodies the modern GENRE reader. Editor-In-Chief Chris Ciompi elaborates, "Joe is a professional?he's the creative director at an ad agency - but he's still youthful and irreverent: He'll openly embrace guilty pleasures like 'The O.C.' And he's not too hard on the eyes either." Ciompi adds, "The GENRE Man is our reader. He's sexy, successful and funny, and it's wonderful to assemble a magazine for readers I respect."

For a complete look at all the hot GENRE MEN from across the country, check out the GENRE website at www.genremagazine.com/genremen.