Ricky Martin: I hated myself for being gay 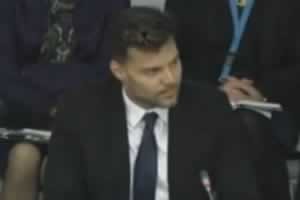 New York, NY - Ricky Martin in remarks before a United Nations forum marking Human Rights Day said he "hated" himself for being gay for many years.

After years of denying rumors about his sexual orientation, Martin announced he is gay in 2010.

"Let me say this loud and clear: lesbian, gay, bisexual and transgender people are entitled to the same rights as everyone else," he said. "They too are born free and equal. I stand shoulder-to-shoulder with them in their struggle for human rights."

Martin weighed in on his own coming out experience.

"If I could come out again, I would come out again, because it felt simply amazing," Martin said. "To all the activists that are here today that opened the doors of light to people like me and to families like mine, thank you so much for what you've done – I've done nothing."

"For many years, I lived on fear. ... I was hating myself, because I grew up listening to a very crooked concept: 'You're gay, you belong in Hell.' It took me a minute to come out, but when I did, it felt incredible. And that's what I mean: I wish I could do it again. And I wish I could stand in front of the cameras and talk to people that are struggling with their identity, and just let them know that it's just beautiful. You find love, you find conventions like this where you are simply loved."

"I mean, we are here all together fighting for one cause and that is equality. And love. And social justice. ... I grew up with a code saying the opposite. And to decode it is very, very, very painful."

Martin added that he came out gay so that his twin sons would know their father.