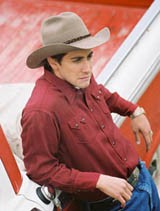 Long before they were the apples of Oscar’s eye, our critics singled out five of the flicks that will compete for Oscar gold this coming Sunday. From Ang Lee’s Brokeback masterpiece to the brilliant ensemble cast of Crash to Felicity Huffman’s bravura work in TransAmerica, we recap some of the films that touched our hearts in 2005.

TransAmerica (*** out of four) – Felicity Huffman (Desperate Housewives) playing a man who is one surgery away from becoming a woman. At first listen, it’s a hard pill to swallow. This isn’t Mrs. Doubtfire where Robin Williams puts on an accent, an apron and spends 4 hours in prosthetics to become and old, British nanny. This is the real deal – Huffman attempting to play a transsexual, male to female pre op.

She pulls it off. Not only does she pull it off, she becomes Bree (Osborne, not to be confused with her Housewives neighbor Van de Kamp), a well adjusted, if slightly neurotic and living below her educational means, woman just days before the surgery that will make her “outie and innie.”

Life couldn’t be that easy, now could it? Bree gets a call from a New York City lockup where a son she never knew she had is being held for shoplifting. So, Bree is off to meet Toby (the adorable and affecting Kevin Zegers), a child she fathered through her one heterosexual encounter 17 years before. In stead of coming clean about her identity, Bree passes herself off as a church missionary appointed to get Toby (who gets by holding drugs and turning tricks on the streets) back on his feet.

What makes TransAmerica work is that the trans issue frequently takes a back seat to the more compelling story – the growing bond between Bree and Toby. Writer/director Duncan Tucker wisely lets this relationship dictate that being transsexual is just one part of Bree’s make-up, a testament to his abilities as a filmmaker.

Though the film slips into stereotypical mainstays so many Hollywood films struggle to steer clear of once or twice, Huffman’s brave, unaffected performance and the tight bond she forms with Zegers anchor this film solidly in reality. Midway through TransAmerica, the spectacle of watching Huffman assume this character dissolves, and suddenly, she just is.

Capote (*** and a half out of four) – Phillip Seymour Hoffman perfects the mannerisms of the title character in Capote – the raised eyebrow, the crooked pinky, and above all, the twangy speech pattern. If you’re old enough to remember Truman Capote’s frequent appearances on the talk show circuits, you’ll have no problem envisioning the quirky munchkin who took giant leaps with his authorship of In Cold Blood.

Obsessed for years with his criminal subject matter and delving into the lives of murderers, Capote becomes consumed with finishing his work and agonized over the slow pace of the process. Supposedly indifferent to the success of To Kill a Mockingbird, penned by his friend Harper Lee (Catherine Keener) during the same time frame, he labors on, drinking his way to the bitter end of his story.

Capote is slow, perhaps intentionally so, and except for brief party scenes where Truman’s wit transcends his private hell, it drags on. But Hoffman will certainly get a much deserved Oscar nomination for his performance. If awards were given for 'Carrying a Picture', he would be running toward the stage with a clever acceptance speech in hand.

North Country (*** and a half out of four) – Charlize Theron delivers yet another brutal and shocking performance, this time as the first woman to successfully sue a major corporation for sexual harassment, in North Country.

As Josey Aimes, Theron ably transitions from raging to vulnerable and every emotion in between, delivering a performance that is in many ways more nuanced and intricate than her extraordinary work in the Academy Award winning Monster. As a single mother on the run from an abusive husband who seeks work at a mostly male-employed mine in Minnesota to put food on the table, the South African born bombshell once again makes you believe her as an every day girl.

There, she’s subjected to sickening and often violent ridicule and harassment from her male co-workers (and people blame her, based on her slightly sordid past). But after weeks of enduring for the sake of a paycheck, she rallies a ball-busting co-worker (the always excellent Frances McDormand) and a do-gooder lawyer (Woody Harrelson) to take the mine down.

Though North Country doesn’t have an obvious gay appeal (though I’m banking my money on at least one of those mine ladies being a lesbian), its universal story of triumph over discrimination is one everyone can relate to. And with award worthy work from Theron, McDormand and Sissy Spacek and Richard Jenkins as Theron’s stoic and religious fanatic parents, North Country is truly a movie everyone must experience.

Brokeback Mountain (**** out of four) – Forget for a moment, if possible, Brokeback Mountain centers around gay cowboys. This deeply effecting film tells a story far more universal than that alone would suggest.

Adapted from a short story by 1994 Pulitzer Prize-winner E. Annie Proulx, the film chronicles an unexpected - and life-long - love which blossoms between two men spending the summer herding sheep in the mountains of Wyoming. On a deeper level, Academy Award-nominated Lee (Crouching Tiger, Hidden Dragon, The Hulk) illustrates the destructive impact societal pressures and internalized fears can have when such emotion is prevented from running its natural course.

In 1963, Ennis Del Mar (Ten Things I Hate About You's Heath Ledger), a ranch hand orphaned young and raised by his siblings, accepts a job on Brokeback Mountain. His employer (Randy Quaid) partners him with Texas rodeo cowboy Jack Twist (Jake Gylenhaal - Jarhead, Donnie Darko). The unique camaraderie and sexual tension which emerges ultimately erupts in animalistic passion. At turns tender, playful and sometimes even violent, it is apparent a genuine love has been born.

Though Jack urges Ennis to continue their relationship, the latter is unprepared to face the social ramifications of taking their feelings away from their private setting. After an initial four year separation, the men reunite for a passion-filled escape to Brokeback Mountain. Ennis' wife Alma, beautifully portrayed by Dawson's Creek alumna and Ledger's real-life fiancee Michelle Williams, stumbles on his double-life. Racked with pain and loneliness, she grows ever-more sullen as her marriage crumbles. Meanwhile, Anne Hathaway as Jack's wife Lorraine - a stark contrast to her role in The Princess Diaries - is utterly convincing. Even a life of privilege cannot prevent her growing bitter, withdrawn and angry as years pass.

Though all the actors involved are surprisingly young, the director coaxes career best performances from each. From his leads - both heterosexual - Lee elicits shocking intimacy. Indeed, Gylenhaal and Ledger create an on-screen connection beyond merely "believable." Their chemistry is palpable, electric.

Though beautifully scripted, acted and shot, there is no happy Hollywood ending for Brokeback Mountain. Fate takes a cruel turn as the men chase a dream close enough to grasp - if only they had.

Sadly, more than 40 years after this film begins, many of the same social pressures, fears and problems which prevented its leads from being together remain. This epic tale of love and loss serves as a powerful reminder why they should not.

Crash (**** out of four) – No gay characters. Not even a character who’s questioning. Yet Crash might just be one of the most relevant films to the gay community to hit theatres in ages.

Prejudice is everywhere, among every ethnic group and sexual minority, large or small. That we’re put upon as a community is only representative of the stereotypes and hate filled banter we send out into the world, and anyone sitting through this two hour masterpiece from director Paul Haggis (he wrote Million Dollar Baby) not challenged to find someone they’ve wronged through hate lives in a dangerous bubble of denial.

Crash boasts a collection of characters anyone living in LA sees sitting at the stoplight every evening after work. From the bitter Brentwood housewife (Sandra Bullock) to the racist, renegade cop and his rookie, green partner (Matt Dillon and Ryan “I’m still hot as hell” Phillippe); the wealthy, Black socialite (Thandie Newton) to her antithesis, the street corner thug (Larenz Tate and Ludacris), their lives “crash” into each other during a particularly deplorable week in Los Angeles.

Consider L.A. its own character – no other city in the world sparks such promise and drive while simultaneously churning such revulsion back into the world.

From rape to murder, drug addiction to abuse of power, Crash magnifies the ease with which the frequently oppressed can morph into the oppressor. It’s a nasty and vicious circle, one that thrives on the unfortunate fact that in order to truly escape, the entire world would have to change.

Powerful performances from Bullock, Dillon and, in particular, Newton fuel this crash course in race relations, American style. And while Haggis’ film many not put sexual identity at the forefront of this case study, that we can relate so well in spite of our not being included speaks to the magnitude of the issues Crash addresses so poetically.