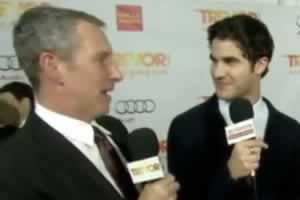 Perry was honored at the group's annual Trevor Live event at the Hollywood Palladium in Los Angeles.

The Trevor Project is the California-based organization centered on crisis and suicide prevention efforts for gay, lesbian, bisexual and transgender (LGBT) youth. The non-profit runs the nation's only 24-hour, toll free confidential suicide prevention hotline for gay and questioning youth.

Perry, 28, dedicated the video to her 2010 single Firework to the It Gets Better Project, which supports The Trevor Project.

Andrew Rannells, who currently stars opposite Justin Bartha in the NBC sitcom The New Normal, performed I Am What I Am from La Cage Aux Folles.

On the red carpet, Darren Criss, who plays gay student Blaine on Fox's Glee, said it was a privilege to be involved with The Trevor Project.