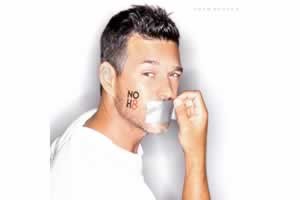 In his photograph, Cibrian is wearing a white t-shirt and attempting to peel back the duct tape from his mouth.

The 39-year-old Cibrian is best known for playing Cole Deschanel on the NBC soap opera Sunset Beach, which aired in the late 90s. More recently, he's appeared on CSI: Miami and Third Watch.