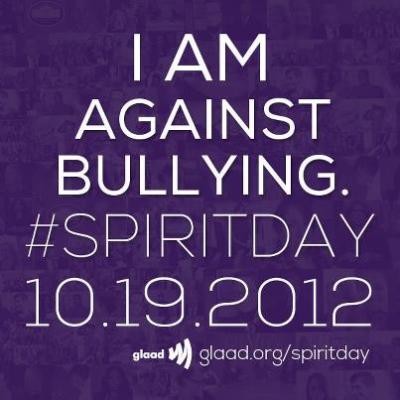 The color purple symbolizes "spirit" on the gay-pride Rainbow Flag

Millions of LGBT advocates and allies are expected to wear the color purple on Friday, Oct. 19, to commemorate the third annual Spirit Day, which is designed to demonstrate support LGBT youth and combat bullying.

"From sports leagues to faith institutions to national monuments, schools and celebrities, millions of Americans will unite this week in an unprecedented show of support for LGBT youth and in a stand against bullying," said GLAAD President Herndon Graddick. "At a time when 8 out of 10 LGBT youth report being harassed at school, it's now more important than ever that we let every young person know that it's okay to be who you are."

Hosts of "Good Morning America," "Access Hollywood," "E! News," "Extra," "The Talk" and "The Wendy Williams Show" are among the television shows participating. In addition, Viacom will turn its network logos purple. Comcast and NBCUniversal will also participate.

The ‘Welcome to Fabulous Las Vegas Sign' and the New York Stock Exchange are among the many landmarks that will go purple.

Celebrity participants and Spirit Day Ambassadors are also encouraging fans and supporters to donate to GLAAD, GLSEN and The Trevor Project by texting ‘PURPLE' to 80888 to make a $5 contribution.

Facebook and sites like Yahoo and Tumblr are also turning purple. For tips on how to help spread the word about #SpiritDay on social networking sites, visit GLAAD's Spirit Day resource page.

Spirit Day was created two years ago by Canadian Teenager Brittany McMillan, who called for all good people to wear the color purple to express 24 hours of solidarity in support of LGBT youth. Spirit Day's name and color scheme are drawn from the purple stripe of the iconic gay-pride Rainbow Flag.