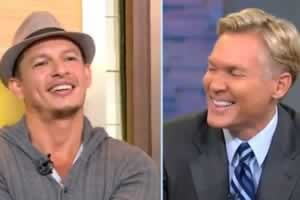 Champion recently told The New York Times that he is marrying Robierb, marking the first time Champion has publicly discussed his sexual orientation. He now becomes the first co-host of a network morning television show to come out gay.

Champion discussed the upcoming nuptials with the GMA co-hosts, though Champion did not reveal any specifics.

He described his fiance as the "most wonderful, giving, loving caring person."

"I'm lucky to have someone like this in my life," Champion said.

He added that he was grateful for all the tweets and Facebook comments in support, saying it felt like a small town where they "walked out on the street and everyone was like, 'Hey congratulations.'"

Josh Elliott pitched himself and George Stephanopoulos as best men for the ceremony.

"And making George and I your best men, that's terrific ... " Elliot said with a wink and a smile.