Despite inclement weather, first year of Out in the Park a success 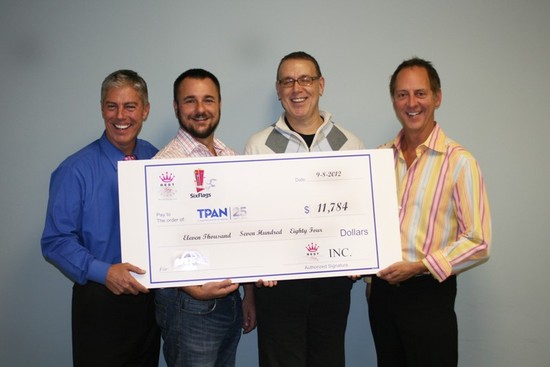 Out in the Park raises $11,784 for Test Positive Aware Network

Chicago, IL - Michael Snell and Derrick Sorles recently presented the Test Positive Aware Network (TPAN) with the funds raised by Out in the Park, which drew near 3400 LGBT folk and their allies to Six Flags Great America in Gurnee, Il. On Sept. 8. The event raised $11,784 for the Chicago-based HIV/AIDS organization.

When Snell and Sorles, co-owners of Best Gay Cities (BestGayChicago.com), took over organizing Out in the Park this year, they made the event into an after-hours private party, granting guests exclusive access to all of Six Flag's rides from 9 p.m. until 1 a.m. and bringing in DJs Matthew Harvat and Phil DaBeatz to spin simultaneously and have their music piped throughout the park. Even a surprise thunderstorm, which rolled in shortly after nine and lasted 45 minutes, didn't spoil the event, but merely sent guests into the designated covered bars seeking shelter.

"It forced people to come together," Snell told ChicagoPride.com. "Even on Facebook someone said, ‘I enjoyed the rain -- and made 5 new friends.' So, it all worked out."

He added, "People told us after the rain stopped, in the 3 hours remaining, they were still able to ride everything -- and some things twice. You can not do that on a regular day at Six Flags."

Snell and Sorles have even bigger plans for next year. While this year's private event lasted four hours, next year it will expand to six or seven. Additionally, Out in the Park is slotted to begin after another private event renting out the park for earlier in the day, eliminating the need for wristbands. The duo also told ChicagoPride.com that they were approached by local impersonators and singers, so they plan to add a live entertainment component to the DJ set for next year's event.

"Even though BestGayChicago.com was the lead on this event - we knew we wanted to make it something for the community and we wanted to involve everyone, and raise money for charity," said Snell.