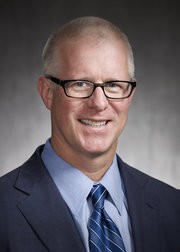 photo credit // sacbee.com
New York, NY - Kevin McClatchy, the former owner and CEO of the Pittsburg Pirates baseball team has told The New York Times that he is gay.

McClatchy, 49 and heir to a newspaper chain, had stayed in The Closet due to the homophobic nature of professional baseball.

"You're not going to solve any problem until you start a dialogue," McClatchy told The Times for an op-ed story published in Sunday's editions. "And there's no dialogue right now."