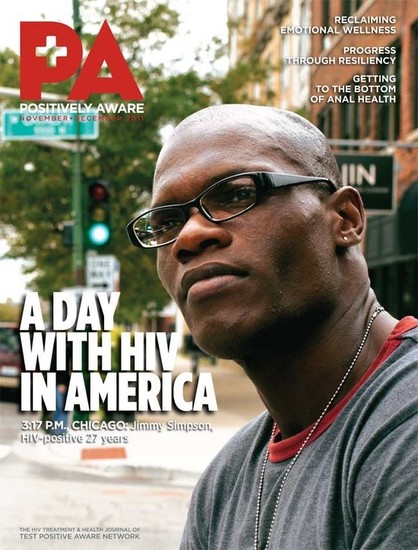 photo credit // http://positivelyaware.com
Chicago, IL - On Friday, Sept. 21 Positively Aware magazine, published by the Test Positive Aware Network (TPAN), asks people to "take their best shot against HIV" as part of their "A Day with HIV" campaign. This is the third year they've held the anti-stigma and awareness-building photo campaign, which asks both those with HIV and their allies to grab a digital camera or use their smart phones to snap a picture of an everyday moment on Sept. 21 that tells their story.

The idea is to have people, both positive and negative, depict what it means to live in a world with HIV and, through the patchwork of their pictures and stories, to "tear down the walls of shame and silence that surround HIV by showing that even in the face of HIV, life goes on."

"By coming together on one single day, we can build a virtual community of support and help raise awareness about HIV not only in our own communities but everywhere," Jeff Berry, Editor of Positively Aware magazine and Director of Publications at TPAN, told ChicagoPride.com. "Our hope is that by bringing together individuals from all walks of life, both HIV-positive and negative, we can not only show support for one another but we can also demonstrate to others that while HIV may affect us, it does not define us."

Berry suggests taking a picture, or having someone else take a picture, of yourself doing something you enjoy or that makes you smile, preferably with a friend. Some of last year's most memorable entries include a "pos" and "neg" couple kissing, Velietta Dickens Rogers at her easel painting, Amber holding a day's regimen of HIV drugs in her hand, the Rev. Andrena Ingram, a Lutheran minister, wearing her "HIV Positive" t-shirt at her church's annual conference and a smiling 2-year-old named Philip who was infected with HIV at birth.

"I have such a mix of emotions every time I look at his photo or just think about him. It kind of sums up the whole campaign for me, showing that there is both heartache and joy in life with HIV," Berry said.

Participants have until the following Tuesday, Sept. 25, to email their pictures, along with their names and a caption, to photo@adaywithhiv.com. The photographs will be featured online at www.adaywithhiv.com and in Positively Aware magazine's November/December issue. Additionally, a panel of judges will select four submitted pictures to appear on four different covers of the magazine. For more information, including tips and suggestions on what makes a good picture, please visit the campaign's website or read Jeff Berry's blog about the event, published in the Huffington Post.