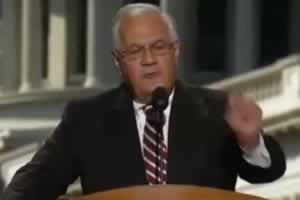 The openly gay 72-year-old Frank first made the assertion during an appearance on SiriusXM's The Michelangelo Signorile Show and he repeated the claim Thursday as he participated in a panel program of the LGBT Caucus at the Democratic National Convention (DNC).

"When they tell us that they're happy to be Republicans because they're getting acceptance and civility, I gotta say that I am again inclined to think that they're called Log Cabin club because their role model is Uncle Tom," Frank said.

"We understand that Barney has earned his protected place within the Democrat Party by being their attack dog on gay rights issues, demonizing Republicans and undermining efforts at bipartisanship that would actually improve LGBT Americans lives. We expect this kind of bile from Barney, especially when it plays into the Obama campaign's efforts to divide, distract and deceive the American people," Cooper said in a statement.

It should be noted that in his former capacity as head of the American Foundation for Equal Rights (AFER), the group formed to challenge the constitutionality of California's gay marriage ban, Proposition 8, Griffin worked closely with Republicans who supported the group's work.

He added: "The truth is that they do play a certain role of kowtowing to the Republican Party in a way that borders on inappropriate itself."