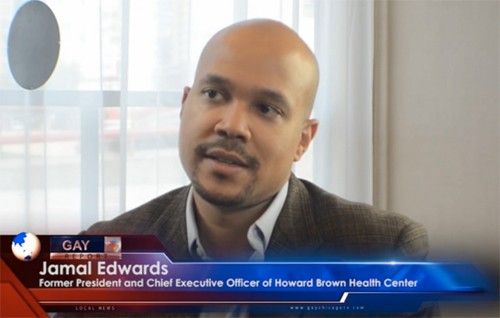 Chicago, IL - President and Chief Executive Officer of Howard Brown Health Center (HBHC), Jamal Edwards, announced Friday that he has stepped down from his role with the organization.

"It's really time for me to focus my energies elsewhere, on my personal life... and just move my career professionally back in the direction that I feel like it needs to go," Edwards told Gay Chicago TV.

Edwards sat down exclusively with GCTV's TJ Chernick to discuss his announcement.


Chair of the Board of Directors, Karma Israelsen, has been named Edwards' interim successor.

Edwards, 35, began his tenure as CEO at Howard Brown Health Center in June 2010 and came in under a haze of financial turmoil, after a previously run investigation revealed mishandling of grant funds by previous leadership. Edwards has not made any immediate decisions on his next steps professionally, stating a desire for personal time.

HBHC was founded in 1974 and has grown into one of the nations largest health care and research organizations serving the LGBT community and allies.