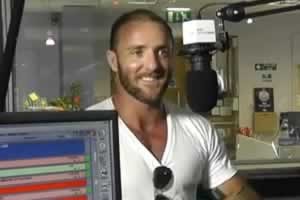 In an August 8 letter sent to Australia's Star Observer, Wallace, who is openly gay, publicly shared his HIV status for the first time.

The 35-year-old gymnast who won a silver medal at the Sydney 2000 Olympic Games said he was inspired by fellow Olympian Greg Louganis' public battle with HIV.

"I too am an Olympic medal winner living with HIV," Wallace said, referring to Louganis' recent appearance on CNN's Piers Morgan Tonight.

"I have never publicly disclosed this before but felt inspired by [the] interview ... and by Anderson Cooper's 'coming out' letter last month describing 'value in being seen and heard' in the face of disturbing violence, bullying, persecution and condemnation by peers, colleagues, government officials and worst of all family and friends."