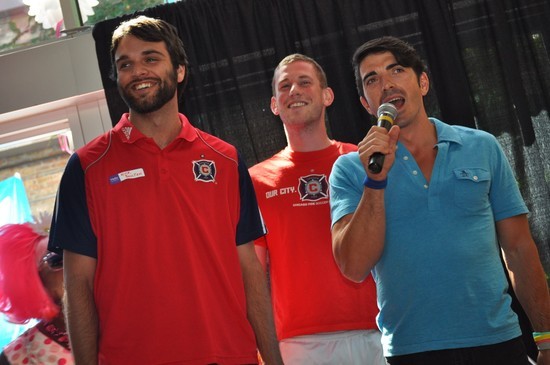 Chicago, IL - This Saturday, August 4, the Chicago Fire is hosting Pride Night at their game against the Toronto FC at Toyota Park in Bridgeview. The event is the culmination of the partnership between the Windy City's Major League Soccer team and Equality Illinois, one of the Midwest's largest LGBTQ advocacy groups. It is also one of the first LGBT specific nights to take place in the history of Major League Soccer.

Several members of the Chicago Fire marched alongside Equality Illinois' "I Do" marriage equality-themed float in the Chicago Pride Parade in June, with the official announcement of the partnership coming on July 5.

"We are excited that this relationship will yield so many benefits for Equality Illinois, the Chicago Fire, and especially the lesbian, gay, bisexual and transgender community and our allies," said Bernard Cherkasov, CEO of Equality Illinois, in a press release officially announcing the partnership. "Most importantly, this support from a major pro-sports team signals to fans and LGBT youth the diverse voices that embrace equality."

This isn't the first Chicago sports team to back the gay community, with both the Chicago Cubs and White Sox supporting LGBT equality work in the past and the Blackhawks marching with the Stanley Cup in the 2010 Chicago Pride Parade. The partnership between Equality Illinois and the Chicago Fire, however, is being hailed as the first of its kind in the Midwest, with Crain's Chicago Business calling it the first "formal partnership" between a local sports team and an LGBT advocacy group.

The partnership developed organically with the Chicago Fire looking for a way to show its appreciation to its LGBT fans and Equality Illinois seizing the opportunity to demonstrate that queer folk are diverse and exist everywhere, including at sports games. According to Chicago Fire President Julian Posada the team is not using the partnership to make a political statement, but did it because "it's the right thing to do."

Over the last month, members of the Chicago Fire have showed their support by participating in Equality Illinois events, such as on July 6 when goalkeeper Jay Nolly and defender Dan Gargan attended Equality Illinois' First Friday cocktail party and networking mixer. This past Saturday, Nick Boulton and Adam Green also represented the team at Equality Illinois' Annual Pie Toss, held at the popular Boystown bar Sidetrack, baring their chests and taking pies in the face in the name of equality.

Portions of ticket sales from Saturday's Pride Night game are being donated to local nonprofit organizations that serve Chicago's LGBTQ community: Equality Illinois, Fred Says and the Center for Gender, Sexuality and HIV Prevention at Ann & Robert H. Lurie Children's Hospital. Tickets that normally cost $40 are on sale for only $30, with $10 of that going to Equality Illinois and those costing $28 are available for $20, with $6 being directly donated.

Tickets must be purchased online at www.chicago-fire.com/pride using the promotional code "Fire." The bar @mosphere in Andersonville is also chartering a bus that will pick up interested parties at the bar, shuttle them to the game and drop them back off at the bar when the night is over. Tickets can still be purchased at @mosphere, which located at 5355 N. Clark near the intersection with Balmoral.