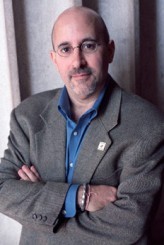 Chicago, IL - Evan Wolfson has probably had marriage equality on his mind for much longer than most people. It was the subject of his thesis in his final year at Harvard Law School, and has been a central focus of his legal career—so much so, in fact, that he's been called the "Godfather of Gay Marriage."

So this month Wolfson, founder of the marriage equality advocacy organization Freedom to Marry, will have that commitment recognized when he serves as Grand Marshall of the 2012 Chicago Pride Parade.

"I've spent a lot of time in Chicago and have a lot of friends there," said Wolfson, who lives in New York City. "But this is even more exciting to me because Illinois right now is one the states at the forefront for marriage equality."

This past spring was an exciting time for marriage equality advocates, with a major setback followed by some steps forward. Shortly after North Carolina voters voted passed an anti-same sex marriage amendment, for example, President Obama publically declared his support for gay marriage. Shortly after that, a federal appellate court declined to weigh in on California's Proposition 8, thereby ensuring that matter will be argued in front of the U.S. Supreme Court.

Meanwhile, in Illinois, a marriage equality bill failed to get much traction in the state legislature, but Lambda Legal and the American Civil Liberties Union filed two lawsuits on behalf of same-sex couples who have been denied marriage licenses.

Wolfson is optimistic that Illinois will eventually have same-sex marriage, whether it comes through legislative or judicial means. "We have made enormous progress and built tremendous momentum, but the work is not going to do itself," he said. "We've changed hearts; we've changed minds—the more we do that, the closer we get."

One such "mind" was President Obama, of course. Some pundits questioned the timing and overall effectiveness of his announcement, but it was heartily welcomed by many advocates, including Wolfson, who had the chance to thank him personally, if only briefly.

Wolfson received the Barnard Medal of Distinction at Barnard College last month. Some time before the ceremony, however, he learned that ceremony would feature another guest: President Obama, who had asked to deliver the school's commencement address.

Wolfson said he did not get the chance to exchange much more than a few handshakes and platitudes with the President, however. "We had no real one-on-one time, but we had the opportunity to thank each other for the work we were doing," he added. "But I felt that he clearly understood how far we had come and how much work we still had to do."

He added that the president's description last month of the "evolution" of his support was a "pitch-perfect way to describe the way he had changed—that explanation really rings true for many people who have taken the same journey."

Wolfson was named by Time Magazine in 2004 as being one of the 100 most influential people in the world, and his legal work has gone beyond marriage equality cases. He argued the landmark case Boy Scouts of America v. Dale in front of the United States Supreme Court, which was Lambda Legal's first trial before the Supreme Court. He also worked on Baker v. Vermont, the case that ultimately led to the establishment of civil unions in Vermont, the first time that classification was put into place by a state.

"One of the main protections we have in society is the word ‘marriage'—people understand the concept of that word and you don't need a dictionary or legal document to explain it to them," he said, adding that civil unions are still problematic for couples because they "lack clarity and respect from society—people still end up being discriminated against."

"Both in terms of tangible and intangible costs, civil unions are no substitute," he added.

Freedom to Marry focuses on a three-tiered agenda: securing marriage freedom in more states; winning support from a majority of the population; and ending federal marriage discrimination.

"I hope my being at the Pride Parade can ratchet up interest in the work we're doing, and in the work of organizations like Equality Illinois, Lambda Legal, and the ACLU so we can create a climate of change."

Last October, Wolfson saw some of the fruits from his work come back to him when he married his longtime partner Cheng He in a ceremony in New York.

"It was such a sweet and wonderful moment for me, to stand with family friends that day, and share in the joy and power of being pronounced married," he said. "Even for someone like me who has been preaching about its power, for years, it's an incredible feeling."

"I wish that sweetness for everybody," Wolfson said.