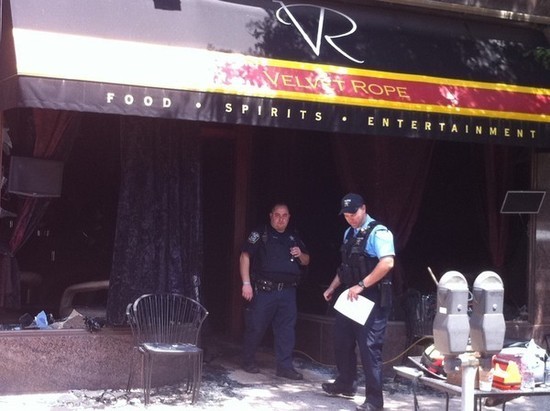 Oak Park, IL - The owner of Velvet Rope Ultra Lounge, which was destroyed by a fire early Sunday morning, calls the incident "suspicious" after anti-gay comments were found on one of the walls inside the club.

Owner Frank Elliot, 25, told ChicagoPride.com that derogatory comments were found; however, he was unaware what was written because Oak Park police removed them before he was allowed into the building.

Authorities were seen Sunday removing a piece of concrete wall, which is believed to have a hand print, for investigation.

Oak Park Police Commander Phyllis Howard told ChicagoPride.com Monday that the fire is being investigated as suspicious, but would not confirm anti-gay writings or graffiti were found at the scene.

Elliot also said a back door to the club had been kicked in and the safe in his office remained untouched.

Oak Park officials called in investigators from the State Fire Marshall after determining there was probable cause to indicate arson was the cause.

The nightclub was closed at the time and no injuries were reported. "No one was injured thankfully," Elliot said.

An Oak Park resident, Elliot has owned the club for three years. Elliot also has plans to open another lounge in Boystown. The Bonsai Bar & Lounge will be located at 3503 N. Halsted in the former Leather Sport space.

As for the Velvet Rope Elliot called it a total loss, but told ChicagoPride.com he hopes to rebuild. "The Velvet Rope team is a family and we all stick together," he said.

The club was boarded up as of Monday morning.

No one is in custody and police continue to investigate.