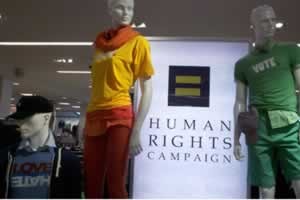 Macy's on Friday began selling a line of t-shirts to coincide with Gay Pride month.

One shirt says "Vote Equality" and another "Love Conquers Hate" along with the HRC logo.

The shirts will be displayed prominently in stores along with HRC signage.

According to HRC, Macy's "has consistently rated highly on the HRC Foundation's Corporate Equality Index, the national standard in evaluating policies, practices and diversity efforts relating to LGBT workers."

Retailer Target has been strongly criticized for its decision to sell Gay Pride t-shirts at its online store. Most of the criticism has come from groups in Minnesota which support a proposed state constitutional amendment banning gay marriage. Gay Pride shirts benefiting a gay rights organization on sale in Macy's Minneapolis store appears likely to face similar criticism. The retailer's promotion of an HRC "Vote Equality" shirt during an election year could spark nationwide interest.