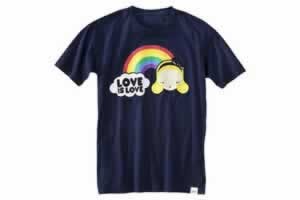 Chicago, IL - Opponents of gay marriage are speaking out against Target selling a line of Gay Pride shirts.

Sales from the shirts, which are being sold on the retailer's website, support the Washington D.C.-based Family Equality Council, which supports gay, lesbian, bisexual and transgender families.

One shirt includes a graphic of a pair of rainbow-colored sunglasses. Another crew shirt, part of Gwen Stefani's clothing line Harajuku Mini, includes a rainbow along with the words "Love is Love" in a comment bubble. All styles cost $12.99 each.

The Minnesota-based Target is coming under attack from supporters of a proposed amendment to the Minnesota Constitution which would define marriage as a heterosexual union, despite the fact that the company has remained neutral on the issue.

"It's really a kind of slap in the face to people of faith and supporters of marriage," Frank Schubert, campaign manager for Minnesota for Marriage, told Minnesota Public Radio. Opponents of gay marriage "constitute a large majority of people in Minnesota and an overwhelming majority of Target's customers."

Schubert claimed that Target had "intentionally injected themselves into the marriage campaign."

"People are upset about it, and they're responding, and we encourage people to let Target know that they're upset," he said. "It was a stupid move on their part and we're going to hold them to account for it."

In a statement, Target said the company "supports exclusivity and diversity in every aspect of our business and has a long history of supporting the LGBT community through giving, volunteerism and event sponsorship and participation."

"Target is pleased to be able to bring our guests products they want while, in turn, helping support the LGBT community through the donation of 100 percent of the purchase price to the Family Equality Council."