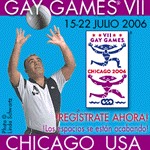 Chicago, IL - Spanish speakers interested in the 2006 Gay Games in Chicago now have a website of their very own. Chicago organizers of Gay Games VII have launched a Spanish-language website with complete information about the 2006 sports and cultural festival.

Located at http://www.GayGamesChicago.org/es/ the website features more than 200 pages with nearly 100,000 words of professionally-translated information about the Gay Games sports and culture program, travel and lodging, registration and immigration, as well as Spanish-language maps, news and ticketing information. Gay Games VII Sports & Cultural Festival will take place in Chicago 15-22 July 2006.

“We are very excited that the Gay Games website is now available in Spanish,” said Mario Rodriguez, publisher of Puerto Rico’s Nuevos Tiempo Magazine and OrgulloBoricua.net. “This will make our Gay Games recruitment efforts more effective. Chicago will be a great destination for the Spanish-speaking community in 2006 and we look forward to being part of the team welcoming athletes, artists and fans to the next Gay Games.” Nuevos Tiempo and OrgulloBoricua.net are media sponsors of the Gay Games.

“Chicago has a special connection to Latin America,” said Kevin Boyer, Chicago’s Marketing Committee Chair who supervised the translation. “Almost 20% of our city’s population is of Latin American descent and more than 500,000 people in Chicago speak Spanish. Our organization has committed itself to significantly increase Gay Games 2006 participation from Latin American countries and a Spanish-language website is an obvious next step.”

Visits to the Gay Games website from more than a dozen Spanish speaking countries, including Mexico, Peru, Argentina, Spain and Costa Rica, more than doubled after Chicago organizers launched a test email to 300,000 Spanish speaking subscribers to Gay.com. Spanish-language registration information is located at http://www.GayGamesChicago.org/es/registration/. Spanish-language inquiries received by Chicago as a result of visits to the new website will be answered in Spanish with translation support from the Marketing Committee’s Latin American team members located in Mexico, Puerto Rico, Chicago and Spain.

In the 3rd quarter of 2005, Chicago organizers will announce the details of a scholarship program that will bring athletes and artists from Latin American countries to the Gay Games. Individuals and businesses interested in learning how to sponsor an athlete or artist through the scholarship fund should email info@GayGamesChicago.org.

The Gay Games VII website will also soon be available in French and German. Information is available in English at http://www.gaygameschicago.org.

About Gay Games VII
Gay Games VII Sports and Cultural Festival will take place 15-22 July 2006. Over 12,000 athletes from more than 100 countries will compete in 30 sports ranging from softball to dancesport, swimming to tennis. The weeklong event will include band, cheerleading and color guard performances, chorus, an ancillary arts festival, and a series of community-organized social events and parties. The opening ceremony is scheduled for 15 July at Soldier Field, the lakefront home stadium of American-style football's Chicago Bears. Closing ceremony will be 22 July at Wrigley Field, the home of Major League Baseball's Chicago Cubs, located in the heart of Chicago's largest LGBT neighborhood.

Registration for Gay Games VII is now open at http://www.GayGamesChicago.org/es/.

The Federation of Gay Games is the international governing body that perpetuates the quadrennial Gay Games and promotes the event's founding principles of Participation, Inclusion, and Personal Best™. For more information, visit http://www.GayGames.org.