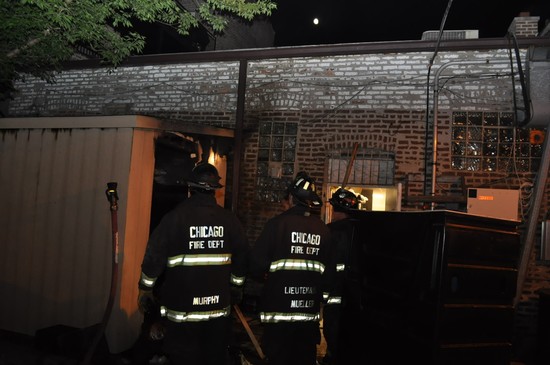 Chicago, IL - The Chicago Fire Department is investigating several overnight fires that were set on purpose in the North Center and Lakeview neighborhoods with the worst damage reported in Boystown.

According to CFD, the fires were set in dumpsters between 11 p.m. Tuesday and 2:50 a.m. today. No injuries were reported in the fires.

The worst damage occurred when an arsonist ignited a storage shed filled with alcohol for Taverna 750. Flames destroyed the structure, but there was no damage to the popular eatery located at 750 W. Cornelia Ave.

Owner Paul Canella told ChicagoPride.com that the restaurant will be open as usual.

Update: Initial media reports indicated 12 separate fires in the two neighborhoods, but the Windy City Times reported Wednesday afternoon that the number was inaccurate according to Chicago Police. Officials said they received 12 calls about four fires.

No arrests have been made. The Chicago Police bomb and arson detectives are investigating.