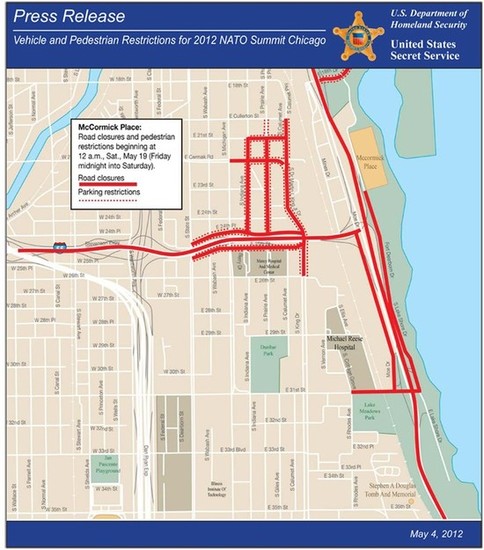 Chicago, IL - In a little over two weeks, the North Atlantic Treaty Organization (NATO) is hosting its 25th summit in Chicago. Leaders from NATO member countries are scheduled to attend the two-day event taking place May 20-21, 2012.

In addition to the road closures and parking restrictions listed below, there will be temporary closures on interstate roads and throughout the downtown area beginning on Saturday, May 19, until Monday, May 21, to allow motorcades to travel to and from McCormick Place and other event sites.

The major roadways affected by these intermittent closures include: I-90 East & West (Kennedy Expressway) between O'Hare International Airport and downtown; Ohio Street from I-90/94 to Fairbanks Court/Columbus Drive; Ontario Street from Fairbanks Court/Columbus Drive to I-90/94; I-90/94 East and West between downtown and I-55 Roosevelt Road, 18th Street, and Canalport Avenue access from I-94 West.

There are several buildings in the the city that will be impacted by heightened security restrictions. These areas include McCormick Place, the Northern Museum Campus, Willis Tower and the Chicago Cultural Center & Art Institute of Chicago.

Commuter rail lines in Chicago will not be closed to riders during the NATO Summit. However, passengers should plan for delays as trains approach and pass through the McCormick Place stop due to necessary security measures.

The McCormick Place stop will be closed on both Sunday, May 20 and Monday, May 21. Other stations may be closed as needed. Additional information on route changes during the NATO Summit will be available online via Metra at http://www.metrarail.com and the Northern Indiana Commuter Transportation District at http://www.NICTD.com.

Changes to bus routes within the vehicle and pedestrian restricted areas will be necessary. Information on route changes will be available on the Chicago Transit Authority website at
http://www.TransitChicago.com.