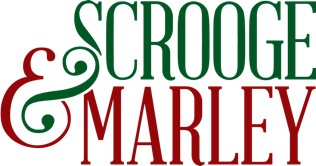 Chicago, IL - Between now and May 12 Chicagoans might catch a glimpse of something common for our urban-dwelling counterparts on the coasts, but not so here in the Midwest: a movie being filmed. Shooting for "Scrooge and Marley," the highly-anticipated gay adaptation of Dickens' classic holiday novella, began here in Chicago on Monday April 30. What is now a full-fledged indie film, expected to be released at Christmas this coming year, started out as a project between friends.

Co-directors Peter Neville and Richard Knight Jr. met while working at the nightclub Kaboom! in the early 1990s and continued to collaborate over the years, together creating the queer-themed, cinema-centric internet talk show "Movie Queens." Neville is a videographer, director and video editor who has worked on music videos and commercials among other projects and Knight is a film critic and general creative type who writes from a queer perspective. The two have long discussed making a movie together, Neville told ChicagoPride.com.

The seamless inclusion of gay characters in out director and screenwriter Thomas Bezucha's 2005 movie "The Family Stone" inspired Knight, who wanted to see an entire holiday film told from a gay perspective. Gay cinema can be accused, and justly so, of being often farcical, occasionally melodramatic and frequently salacious, but when Knight set out to write an adaptation of "A Christmas Carol," he wanted to go beyond camp to deliver a true holiday classic imbued with a gay sensibility.

"At last, there will be a holiday movie that gay people can call their own—something that we can return to year after year," Knight said in a press release.

Together with Ellen Stoneking, co-founder of the Annoyance Theatre, and the late Timothy Imse, Knight wrote a contemporary retelling of one of the most beloved Christmas stories, second in fame only to that of a young woman who gave birth to her son in a manger some 2000 years ago. Although the film has funny and light moments, the script is straightforward and heartwarming; it's a story told through a gay lens, but intended for audience members of all persuasions. Knight brought his finished script to Neville, who was in possession of a new HD camera perfect for their first feature film.

"I was going to shoot it, do the sound, do the lights and a thousand things and he was going to do the other thousand things to make a movie happen. That's where it started and then he got Tracy involved," Neville told ChicagoPride.com, referencing Executive Producer Tracy Baim. "Once she got on board it just went into a whole nother direction...more professional in that she could raise the money to make it a bigger picture."

Baim is the publisher, executive editor and co-founder of Windy City Media Group, which produces gay media in Chicago, including "Windy City Times," Chicago's oldest LGBT newspaper and the only one still published in print. In the fall of 2011, Knight brought the script for "Scrooge and Marley" to Baim, who also executive produced "Hannah Free," an independent film about lesbians starring Sharon Gless, a few years earlier. Impressed by the script, Baim agreed to lend her expertise to Neville and Knight and brought on David Strzepek as another executive producer.

"Film is very different than newspapers, but what I love about film is that it is just another way to tell our stories," Baim told ChicagoPride.com.

Audiences may be surprised to find that the title characters of "Scrooge and Marley" were not recast as lovers and, in fact, much of Dickens' 160-year-old story remains the same. "Humbug" Ebenezer Scrooge, played by native Chicagoan and out actor David Pevsner, is visited by the ghost of his deceased business partner Marley, Saturday Night Live cast member and Second City alum Tim Kazurinski, who warns that Scrooge will be visited by three ghosts.

Neville's relationship with Cavanaugh goes back to 1984 when they were both part of the Peninsula Players comedy troupe in Door County and he knows Ronnie Kroell from commercials that Neville shot and Kroell modeled in. Much of the cast was brought on in this manner.

"Everybody that got involved knows so-and-so and so-and-so, and it just started becoming bigger because everyone involved people that they knew," said Neville.

Knight and Neville knew Bruce Vilanch from an appearance on "Movie Queens" and brought the two-time Emmy Award winner on to appear as the discoteque-owning Fezziwig.Chicago-actress Rusty Schwimmer is a friend of Knight's and is cast as Freda, Scrooge's lesbian niece who in Dickens' text is Scrooge's nephew Fred. David Moretti on the other hand, best known for his roles on "The Lair" and "Dante's Cove," which are broadcast on the LGBT-oriented tv station here!, contacted the film personally to secure a part.

"I'm not really one to pass up an opportunity so I literally wrote them an email saying 'hey I wanna be in your movie,'" Moretti told ChicagoPride.com. "There weren't any characters written for my age or type, but they said if I wanted to, I could make a video of my interpretation of Bob Cratchit, and if it worked, they would consider aging him down... The rest is history."

Moretti got the part and is amongst the actors being flown in from Los Angeles for the filming, which began April 30 and will continue over the next two weeks. The film is shooting in a dozen locations around Chicago, including parks and a cemetery -- for the pivotal scene when Scrooge stumbles on his own grave -- as well as private homes, 3160 bar and Man's Country's upstairs for interior shots.

While the actors are in town, "Scrooge and Marley" is also holding a fundraising mixer at Mary's Attic in Andersonville on Sunday May 6 from 3 to 5 p.m. The event is a chance for Chicagoans to meet Knight and Neville as well as Pevsner, Moretti, Kroell, Schwimmer and several other members of the cast and crew. Tickets, available at the door, are $20 and include hors d'oeuvres, half-priced drinks and a chance to buy the first "Scrooge and Marley" logo merchandise.

More information about "Scrooge and Marley," including a full cast list, can be found at http://www.scroogeandmarleymovie.com.

For details about the May 6 fundraising event, please visit: http://www.scroogeandmarleymovie.com