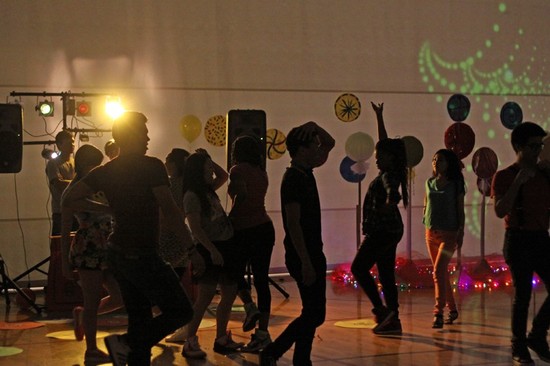 photo credit // alex sennello
Evanston, IL - After weeks of planning by students, professionals, and allied adults, a dance for queer youth was held in Evanston's McGaw YMCA on the evening of April 14.

The dance was a combined effort of three groups; the McGaw YMCA; Pride of Links, a youth group for queer identified youth with locations in Northfield, Palatine, and Evanston; as well as the Evanston Township High School's gay straight alliance.

Lawrence Carter, the youth leadership manager of the McGaw YMCA, explained that the dance was an effort to gain attendance and visibility for their new Pride youth group for queer youth facilitated by himself and Erschel DeLeon, the youth program Director at Links, a North Shore youth health service provider.

Carter went on to say that after last year's cluster of LGBT youth suicides, "a group of people at McGaw YMCA looked at what they could do to help solve the problem; people thought of a hotline and big things like dances and events, but we decided to scale back and just start with a youth group first and go from there."

Bill Farmer, the faculty sponsor of Evanston Township High School's GSA sympathized with the efforts of McGaw YMCA and their Pride group, stating that he knows that "it's been a tough thing to come to [group] on Monday afternoons [when the group meets]", explaining that the group has an average attendance of five to ten people. Farmer went on to say that the students in Evanston's GSA had wanted to host a dance for quite some time, and when the YMCA approached the group they jumped at the opportunity to put one on.

The Candy Land themed dance attracted roughly 40 students from all across the North Shore and featured a dance performance by Northwestern's Refresh dance crew.