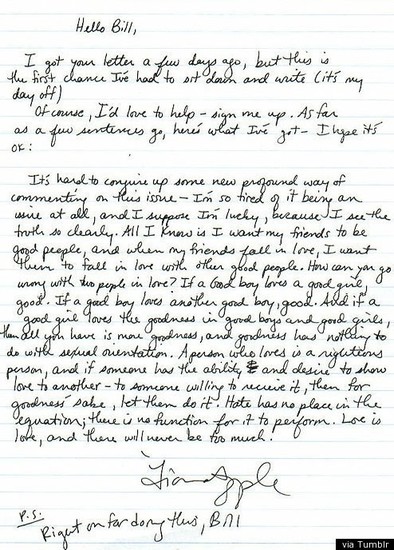 photo credit // ohheybill.tumblr.com
New York City - Singer Fiona Apple is back in the headlines for an upcoming album -- and for a letter she wrote to a gay teenager 12 years ago.

The boy, Bill Magee, was 16 at the time. He wrote to her asking if she'd write a letter to his Gay-Straight Alliance.

Magee met Apple on a Friday, and she Fedexed him the handwritten note a few days later.

"A person who loves is a righteous person," she continued, "and if someone has the ability and desire to show love another — to someone willing to receive it, then for goodness' sake, let them do it. Hate has no place in the equation; there is no function for it to perform. Love is love, and there will never be too much."

Apple is a songwriter and a poet. She is now 34 years old and will release a new album, "The Idler Wheel is wiser than the Driver of the Screw and Whipping Cords will serve you more than Ropes will ever do," in June.