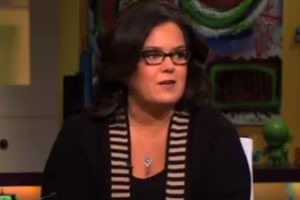 Kirk Cameron has emailed Rosie O'Donnell a note saying that the pair should discuss gay rights over dinner.

O'Donnell invited Cameron to appear on her talk show, The Rosie Show, to discuss his recent remarks on the subject.

In a video posted online Wednesday, O'Donnell said that Cameron was not willing to come on her show, but would meet with the openly gay O'Donnell.

"I got an email from Kirk Cameron," O'Donnell said. "He is busy and he has a lot do, but he wants to have dinner. Maybe that's a better way to start rather than on TV."

Cameron, 41, told Piers Morgan the being gay is "unnatural" and "ultimately destructive" to society, and that he would not be supportive if one of his six sons told him he was gay.

"He did kind of have an interesting answer. He felt [homosexuality] was responsible for the decline of civilization. Which is a little hurtful. As an almost 50-year-old lesbian, I feel guilty really for society's downfall," O'Donnell said.

She added that perhaps Stephen Baldwin, who earlier defended Cameron's remarks, might join them.