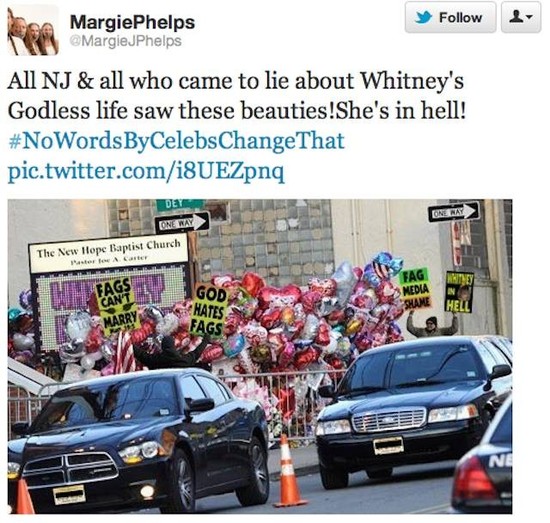 "Time for Westboro picket of Whitney Houston's funeral. So many piling up to blather about her today. Not ONE of them warned her of hell," tweeted Margie J. Phelps, daughter of the 81-year-old Fred Phelps, who founded the hate group.

During the ceremony, she posted a picture on Twitter apparently of the small group at the funeral.

The Newark Star-Ledger debunked the church's claim indicating there was no sign of protests in the area. Instead members of Westboro Baptist Church reportedly used Photoshop to make it seem as though they were there.

The Topeka-based hate church, which is not affiliated with a larger denomination, is made up mostly of Fred Phelps' immediate family. The church gained national attention when they protested at the funeral of Matthew Shephard with signs that read "No Fags in Heaven" and "God Hates Fags."

Nate Phelps, the son of Fred Phelps, spoke last year of the brutality and abuse that his father inflicted upon their family.

"I think that he's a sociopath," Phelps reportedly told an audience of over 500 people in Missouri.

WBC is monitored by the Anti-Defamation League and is classified as a hate group by the Southern Poverty Law Center.