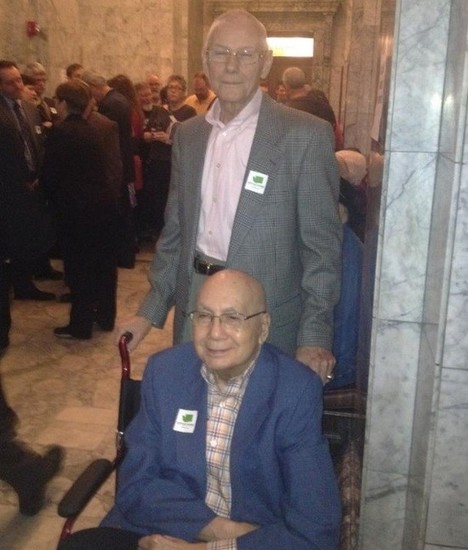 john and rudy have waited 53 years to get married.

"Washington will say yes because a family is a family," Gregoire said. "It is time to give our loving gay and lesbian couples a chance to have a married life in the state of Washington.

Gregoire also said that her daughters have told her gay and lesbian marriage is the "civil rights issue of their generation."

Rep. Jamie Pederson watched the ceremony as his partner and their child waited nearby.

"Years from now, our kids will look back and ask what all the fuss was about," he told the Seattle Post-Intelligencer.

The measure allowing marriage equality received final legislative approval from the House last Wednesday, a week after the Senate approved it.

The law will take effect June 7, unless opponents gather enough signatures to place the measure on the November ballot. More than 120,000 signatures must be collected by June 6 to challenge the law.

I encouraged them to continue the fight," Santorum said. "There are ebbs and flows in every battle, and this is not the final word."

Washington will become the seventh state to allow same-sex couples to wed. Same-sex marriage is legal in Massachusetts, New York, New Hampshire, Vermont, Connecticut and Iowa as well as the District of Columbia.