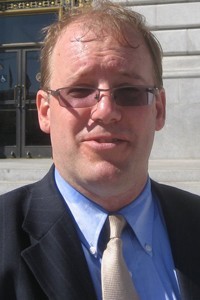 Montgomery, AL - Americans For Truth About Homosexuality (AFTAH), based in west suburban Naperville, is set to hold a press conference outside the headquarters of the Southern Poverty Law Center (SPLC) Tuesday to protest the organization's classification of them as a hate group.

Headed by Peter LaBarbera, the anti-gay group was labeled a "hate group" by SPLC in 2010. AFTAH lost its tax-exempt status in 2011 for failure to file proper paper work for 3 consecutive years.

LaBarbera contends the SPLC has never labeled a "gay" organization or website as "hateful."

The SPLC's criteria for labeling a group or organization as a hate group requires that the group spread discredited and slanderous propaganda.

Previously, the SPLC labeled the Illinois Family Institute as a hate group.

LaBarbera has also been employed by the anti-women's right organization, Concerned Women for America (CWA) and was a reporter for the conservative Washington Times newspaper.

The Alabama-based Southern Poverty Law Center, which works to fight discrimination, hate and bigotry and promote justice and equality, tracks hate groups and extremists across the country as a part of their mission.