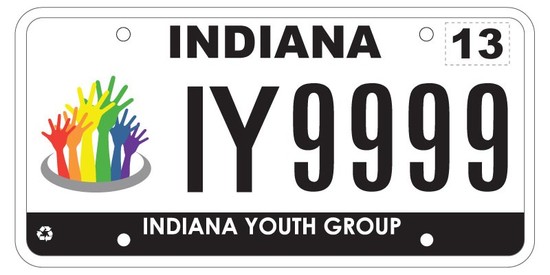 Indianapolis, IN - There's a new way to show support for lesbian, gay, bisexual and transgender (LGBT) equality in Indiana. The Hoosier state will next month begin to offer its first license plate featuring the logo of an LGBT organization.

The new specialized plates will include the logo of the Indiana Youth Group (IYG), an organization that advocates tolerance and provides training for schools and service agencies.

IYG Executive Director Mary Byrne provided GoPride.com with a first look at the final mock-up of the plate (pictured), which will be available beginning in February and will cost an additional $40 with $25 going directly to the group.

The suit was dismissed and the group applied for the new plate a third time.

It was initially reported that Indiana was the first state in the country to offer an LGBT license plate; however, GoPride.com found that Equality Maryland has offered Marylanders the opportunity to purchase a state license plate with their logo since 2009.

"Kudos to the Indiana Youth Group for working with the State of Indiana to create these license plates, like Equality Maryland," said Patrick Wojahn, President of the Board of the Equality Maryland Foundation. "This sort of visibility shows everyone that LGBT people are your neighbors, your co-workers, the people you see in the grocery store every day."

Although not the first in the nation, the new Indiana LGBT awareness license plate is being counted as major victory in a state not known for gay rights.

Byrne told GoPride.com that a full statement is forthcoming.